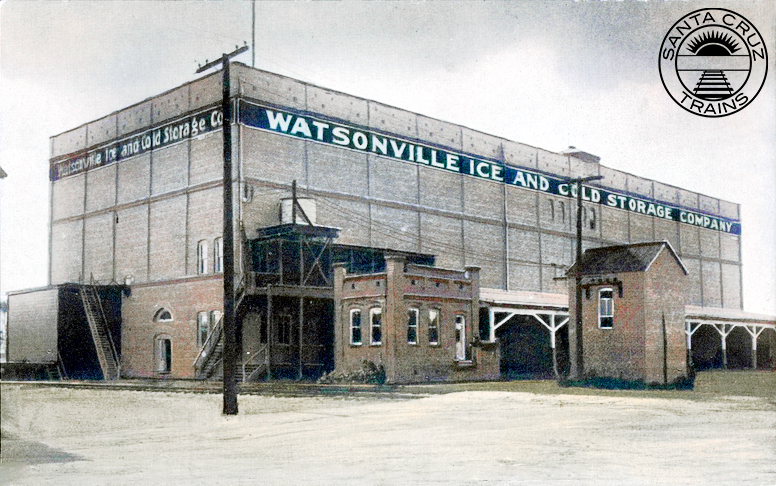 Even as I am editing and adapting The Reign of the Lumber Barons: Part Two of the History of Rancho Soquel Augmentation, I am also working towards my future books in the Santa Cruz Trains series, especially the unexpected third book: Companies & Customers of the Santa Cruz Lines. This book is going to be chock-full of corporate histories of many of the best-known companies to have operated in Santa Cruz County. In total, there have been well over 300 separate companies that have shipped products from the many railroads found within and around the county, over a third of which operated exclusively in the Pajaro Valley. A few companies still ship freight today, but others have expressed interest in expanded freight service.

The purpose of this book, though, is to reveal the full history of the hundreds of companies that have used the local railroad lines. While the first two full-sized books in the series, Railroads of the Santa Cruz Mountains and Railroads of the Santa Cruz Coast, are focused entirely on the history of the local railroads and the stations and sights along their lines, this third book takes a closer look at which companies and people were attracted to the lines for industrial purposes. Some of the material will be a little repetitive, but whereas the chapter in Railroads of the Santa Cruz Mountains about Clems Station will look at Clems as a station and passenger stop, the articles in Companies & Customers will look at the E. A. Clem & Company, Santa Cruz Portland Cement Company, and William J. Dingee, who all operated businesses from the spur at the station. The articles will reference each other, but have different focal points.

The hard challenge of a book such as this is compiling the list of freight customers. Since I first began blogging on Santa Cruz Trains back in 2012, I unconsciously began compiling a list of freight patrons. But now this has become a more precise task and there is a lot of Santa Cruz County history to cover. The first freight stops in the county were established in 1875 and there have always been at least a few freight customers to the present, so that’s nearly 150 years’ worth of customers. Sanborn Fire Insurance Company maps from the 1870s through the 1920s provide snippets and clues to who operated freight stops, but not every area of the county was covered by these maps and anything after the 1920s requires other material. Aerial photographs from 1928 onward show sidings and spurs, but do not attach names to the businesses depicted. It is not until 1971 that the first Southern Pacific SPINS map of freight customers was released, and by that point nearly 50 years had passed since the last insurance map. Dozens if not more than a hundred potential freight patrons are missing in this void and only chance photographs and newspaper articles have revealed their presences.

I have created a Google spreadsheet of all of the known freight customers in the county. But it is incomplete. If you used to work at a business that used a freight spur/siding, or shipped goods from a nearby spur/siding, or even if you think that a business used one, that can help me a ton in researching for this book. Go to https://bit.ly/3dynB6U. Any of the purple cells can be edited by anybody. Make any comments about existing stops by either typing in the “COMMENTS” column or by right-clicking on a cell and clicking “Comment.” You can add more freight patrons at the bottom of the list below the turquoise/white companies. If you have any trouble with the spreadsheet, just email me.

To clarify, the areas covered by this book are:

This spreadsheet is not intended to actually tell the story of these companies. If you want to give me longer descriptions or get me into contact with somebody who knows about the history of a company, please email me at author@santacruztrains.com. The categories listed at the top of the spreadsheet reflect the most pertinent initial information required to be able to research the companies. Besides the name, it is vital to have a freight patron’s relative location along the railroad in relation to a nearby station, as well as its mile marker or physical address so that it can be cross-referenced with photographs, aerial photos, and maps. Its access type is not as vital, but still helps clarify how the railroad interacted with it.

In addition to direct textual information, I am also very interested in any photographs, past or present, of any of these companies that could be used in the books or on the website. While I have quite a few photographs, I have nowhere near enough photos of freight customers to fill out this book.

Thank you for your help! A book like this is not possible without the input and feedback from people in the community who personally know of these businesses. Any help you can provide at all is excellent.