Loglets, Chips, Sawdust, and Other Euphemisms for News 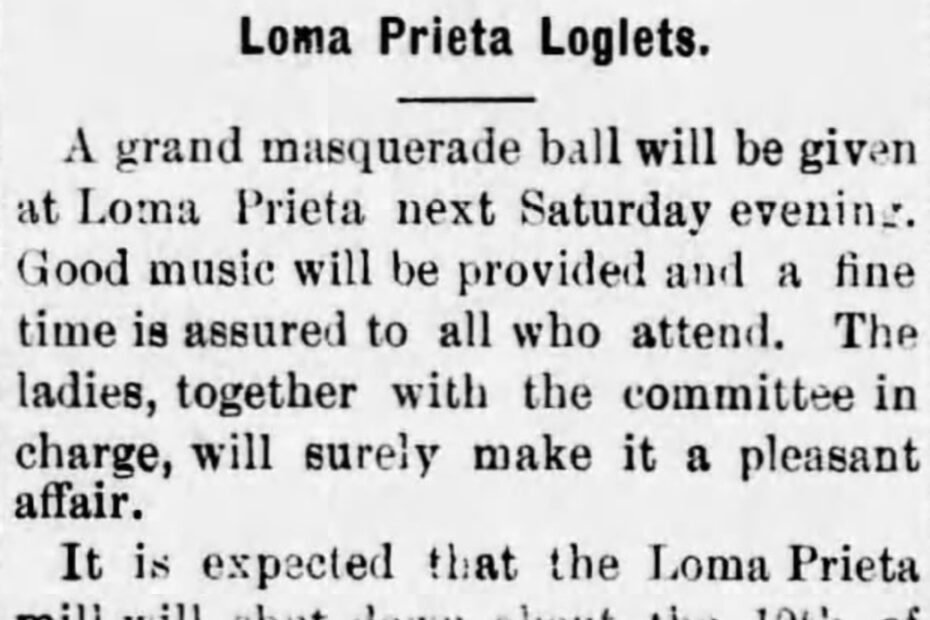 Sample column of the "Loma Prieta Loglets" from the November 29, 1890 issue of the Santa Cruz Surf

Welcome to June 2021, a time when people can go outside again and I’m inside still, writing and editing…oh so much editing…. As usually happens with plans, they went astray and Ronald G. Powell’s The Reign of the Lumber Barons: Part Two of the History of Rancho Soquel Augmentation is delayed a few months, inevitably pushing everything else back a few months too. In reality, I always suspected this would happen, but I was very optimistic with a May 2021 release. Unfortunately, even with moving to a bi-weekly format for my Santa Cruz Trains blog posts, life and other things got in the way, pushing back the release date of this second book by Powell.

Not everything was anticipated, though. In many ways, The Reign of the Lumber Barons is more straightforward than The Tragedy of Martina Castro. The timeline is a little loser, but the focus is more precise. The book focuses on logging operations in and around Rancho Soquel Augmentation, specifically the Loma Prieta Lumber Company mill on Aptos Creek and Frederick A. Hihn’s mills on Trout Gulch and Valencia Creek, between the years 1865 and 1900 (give or take). The stories parallel each other but only occasionally overlap or intersect. The bigger story is the Loma Prieta mill’s, which  involved major investors, the Big Four, the Southern Pacific Railroad, the Castro family, important Watsonville lumber barons, and a thriving (albeit short-lived) settlement four miles into the wilderness of today’s Forest of Nisene Marks. The Valencia mill’s story is much more down-to-earth, beginning later and ending sooner, although the village associated with the mill outlasted it by several decades.

This contrast between the two mills was noted by Powell in an unusual way. He discovered that the Santa Cruz Surf newspaper—a popular weekly and daily that ran from the 1870s through to the 1910s—recruited reporters from Loma Prieta and Valencia. The columns they wrote, most commonly known as “Loma Prieta Loglets” and “Hihn’s Mill Happenings,” were spin-offs from the regular “Personal Splashes” and “Shifting Sands” society and business columns, and they only appeared as stand-alone columns when there was sufficient news to justify them. The details included in these columns ranged from the comings and goings of prominent millworkers and their families to mill news to details of social engagements to chance encounters with dangerous animals. In other words, it covered the full spectrum of life in the mountains, although its primary focus was always on the villages’ elites.

Powell made one mistake or oversight, though, when composing his manuscript: he only included the “Loma Prieta Loglets,” not the “Hihn’s Mill Happenings.” Why he decided to include in his book every single “Loglets” column in its entirety I cannot answer, but it was not a bad decision. These quaint summaries of happenings give life to a history that otherwise often feels dry and divorced from reality. Without these snippets of everyday life injected directly into the prime years of lumber activity—the late 1880s to the mid-1890s—the story of lumbering in the Aptos area would be short and simple, just a series of anonymous workers moving from one site to another until all the trees were harvested and the mills shut down. These society columns reveal that much more was going on when the men weren’t cutting trees or sawing lumber. 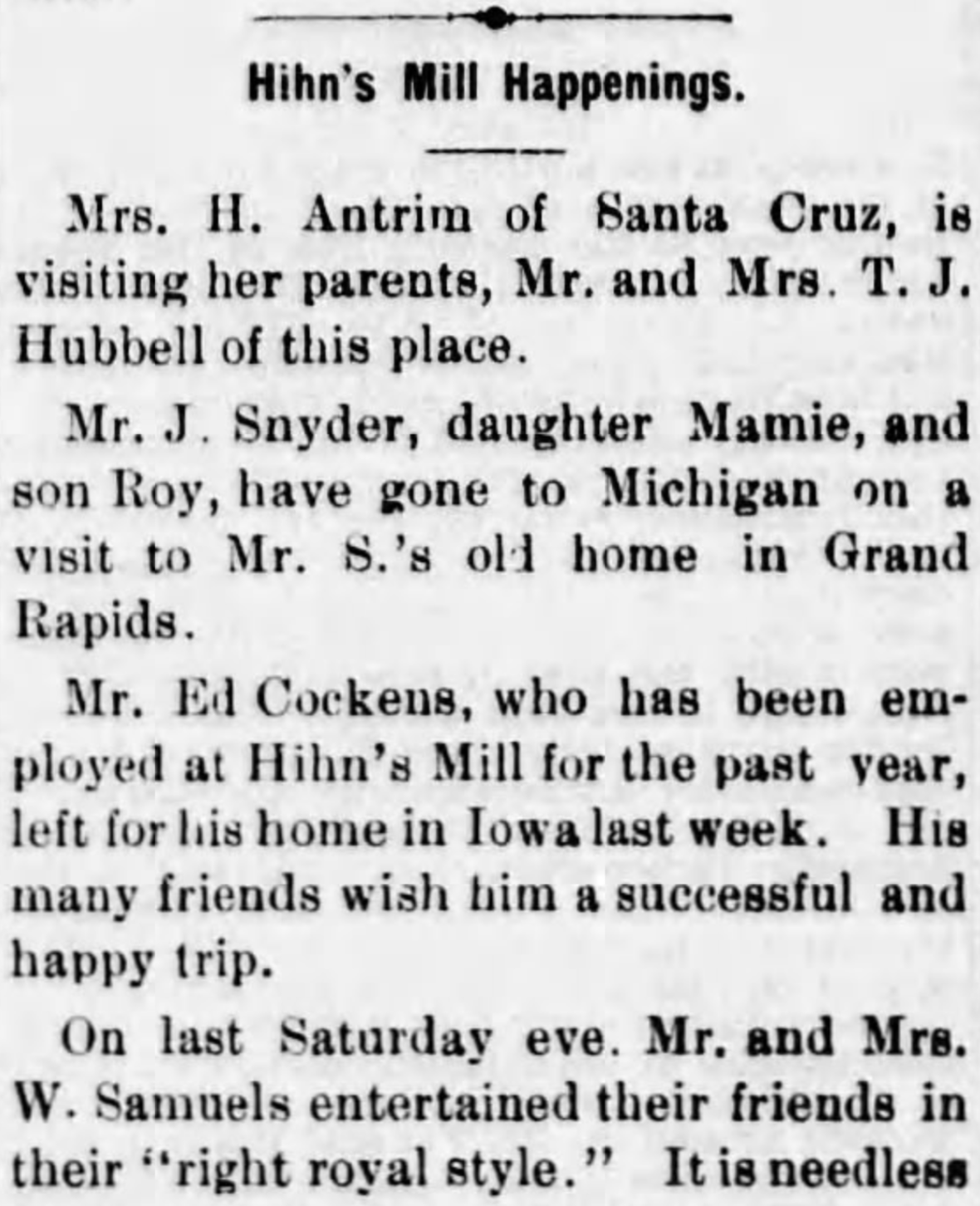 Sample column of the “Hihn’s Mill Happenings” from the October 17, 1888 issue of the Santa Cruz Surf.

Thus, the reason Powell left out the “Hihn’s Mill Happenings” columns, of which there are more than twice as many as the “Loglets,” remains a mystery. They are just as revealing and also more directly address Powell’s original subtitle for his series: “The Frederick Augustus Hihn Story.” Yes, Frederick Hihn himself was little involved with the operation of his Valencia Creek mill, but his family helped manage it and two sons were prominent members of the Valencia community for a few years. Furthermore, the activities at Valencia were just as important otherwise to Powell’s history of the region, especially since the town sat just within the boundaries of the Augmentation. Yet somehow, Powell neglects Valencia in general in his history, relying on Rick Hamman (California Central Coast Railways, 1980) and Edward S. Harrison (History of Santa Cruz County, 1892) for descriptions of the mill, the village, and activities there. He barely ever references newspapers while relying on newspapers heavily for activities at Loma Prieta.

Naturally, such an important oversight had to be corrected, and so it has been. But finding and adding transcriptions of approximately thirty newspaper society columns was no easy feat. It took several weeks to identify all of them since their names changed and newspaper.com’s OCR (text recognition) software was not always up to the task of finding the columns. I am confident that I have found almost all of them, but one or two may have still slipped by. During my search, I also found three “Loglets” derivatives that Powell had missed or ignored. Transcriptions of all of these columns have now been integrated into the final book, satisfactorily padding out the otherwise scant 1888-1894 section that had previously been dominated by business politics and some minor lumbering news items. Hopefully for my sake, no other issue such as this comes up as I finish my first clean edit of the book.

The rest of the editing process has been slow and not all that steady, but it is nearing the end. I have finally reached the end of the sections Powell pulled from Estelle Latta’s now-disproven Controversial Mark Hopkins. I don’t blame him for thinking this was a legitimate source since Latta had not been resoundingly disproved at the time he finished writing, but I know better now and had to once more remove all trace of her poorly-conceived argument from the book. This became a problem when Mary Frances Hopkins and Timothy Hopkins actually entered the story properly through their purchase of land in the Augmentation and shares in the Loma Prieta Lumber Company. The Hopkins story continues even slightly into the third book, so I remain vigilant in determining the legitimacy of Powell’s arguments and statements.

Lastly, things have been delayed a bit since Powell abandoned direct citation of sources beginning in his original Book 5, which is about mid-way through this book. Since I know a lot of the sources he is still using, I have been forced to do additional research to verify what he says and attempt to cite information when possible, especially newspaper articles since Powell had a tendency to abridge or add clarifications to articles without noting it. This process of checking sources and verification has added a considerable amount of time to the editing process, but I find it important for the legitimacy of the work.

Progress continues and my hope is to have this draft done by the end of June, at which point I will do a thorough re-read to edit for clarify and fix some parts that I left for later. After that, I need to pass it on to others for copy editing and readability testing. And then I need to format the book, ensure the typeset is correct, and check the proof. At that pace, I suspect the final product will release some time in September, which is four months later than I had hoped but is nonetheless necessary. At least the third book will be slightly shorter and some preliminary work has already been done with it.

If you are interested in becoming a copy editor or readability tester, let me know. I will select a few people when the second draft is done, probably sometime in mid-July. Otherwise, stay tuned. I will have another update with a more concrete schedule up in a few months. Listen for the sound of the steam whistle. 🚂