Railroads in the Santa Cruz Mountains were a vast network that trunked off of the main line to make branch lines, and subbranch lines. Some were short-lived, and others were not. Trying to stick all of these on a map…well that’s darn-near impossible. Yet, it is something I am required to do because geography is everything.

Simply stating geographic coordinates isn’t enough, nor is noting distances between stations and stops. All of these things are helpful, yes, but they are best understood when looked at together on a map. I do not possess mapmaking skills, but I can trace. Fortunately, the United States Geological Survey program has published many maps over the past century and they have been largely digitalized for public download at various repositories such as the USGS website (http://www.usgs.gov) and the University of Texas at Austin’s Perry-Castañeda Library (http://www.lib.utexas.edu/maps/topo/california/). By using these maps and then superimposing rivers, streams, and rail lines on them, a better idea of how everything links together is possible. These maps also help in determining where specific lines and spurs existed, though they are not always as accurate as they appear, especially regarding the railroad.

The following map is a sample of the map of Felton. The final version of the map will stretch all the way to Santa Cruz and will probably cut a bit more off the top. The railroad lines will hopefully be straighter (these were hand drawn digitally), though the creeks are pretty well off. Captions for the creeks and river will also be more fluid and cling to their bodies of water more accurately. Creeks are shown as smaller than the San Lorenzo River. Likewise, the narrow-gauged tracks between Old Felton and Felton Junction are thinner in scale than the other standard-guaged tracks. These differences will be noted in a scale at a later point in development. A scale rule will also be included to measure distances and a notation pointing true north will be added. 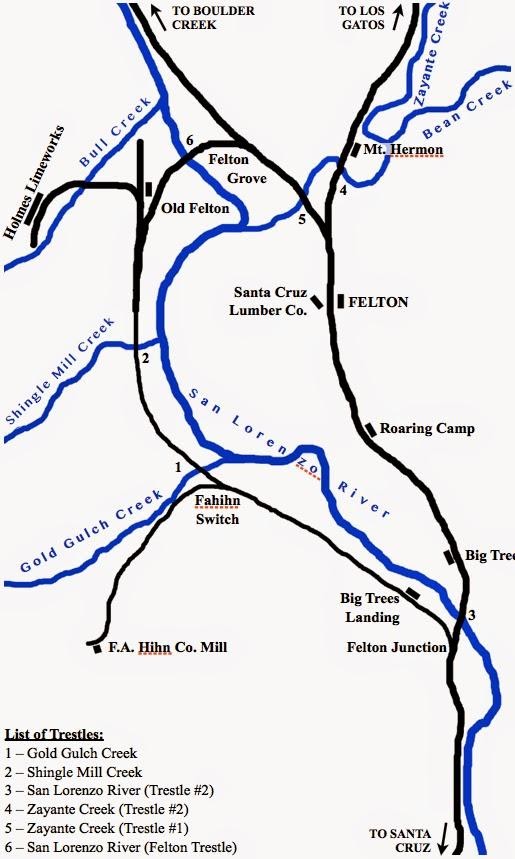 By looking at this map, you can learn a lot about where things were and how active an area was. To give a general idea to the scale, since a rule is lacking at present, this map is roughly 2 miles vertically and 1-1/4 mile horizontally. This alone tells you that a lot of stuff was happening in a small space. One thing it doesn’t tell you, nor will, is when this activity was taking place. If one were to look at this map, they would assume that Big Trees Landing and Big Trees (accidentally cut off) were adjacent to each other simultaneously, but in reality one succeeded the other. This map is not a chronological history of the Felton area.

What this map does tell you, though, is that there were tracks on both sides of the river at one point or another, that Roaring Camp is midway between Felton Depot and Big Trees, and that there were six major trestles in the area (not counting culverted creeks like Bull Creek or other smaller streams). It also shows that the network of water bodies defined the railroad more than roads, therefore roads have been removed due to a lack of relative importance. The locations of station structures are noted as well as their placements, but their sizes and importance are not included. Finally, notes at the fringes of the map point out where other locations (and, presumably, maps) are in relation to this location.

Thus maps provide a helpful means of providing information, but are not exhaustive in their abilities. The articles themselves will provide dates of operation, the type of station (freight, flag, full agency), the lengths of trestles and tunnels, the number of sidings, spurs, etc. These types of things could fit on the map, but it would crowd out the basic features, which are essential to the map. As I further refine and develop these maps for each section, I hope to make them more informative while still keeping it as simple as is reasonable.

Please send me suggestions, recommendations, comments, and whatnot to me. I’d love to hear input and see what things may be of interest to others that I may have overlooked. Cheers!