A lot has happened in the past few months, the most important of which is that I have moved from Santa Cruz. That’s right, the author of Santa Cruz Trains: Railroads of the Santa Cruz Mountains will not longer be centered in Santa Cruz County. But don’t worry, I came prepared and I have a number of people working with me in Santa Cruz helping me when something is missing.

That being said, I have applied for the prestigious James Dolkas Memorial Fund award given by the History Forum annually to recognize and encourage the work local historians. Since I obviously won’t be able to attend the dinner in November, I have only asked for half the award amount so that I can buy some photographs for my book. While I have many photos, I could always use more and most of those that I still need cost money.

As a part of the application, I decided to write up a new article for my book. I’m mostly finished with the sourcing portion of my research right now, but with all the moving going on, I’m taking a break before I start intensively writing. But for the award, I decided to expand my recent Press-Banner article on Dougherty’s Mill & Meehan Station into a full article, with citations and all. The end result is the two-page spread sampled below: 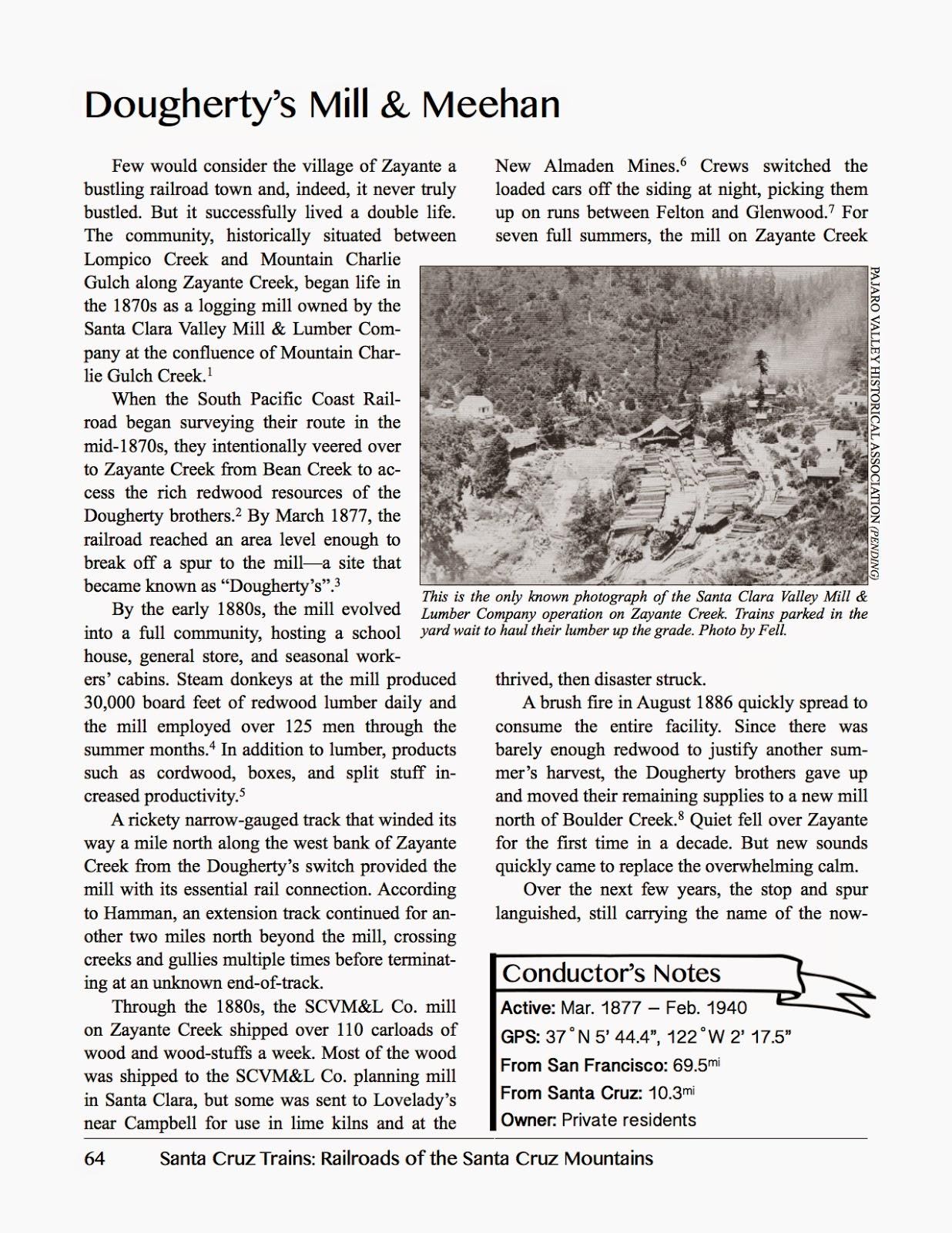 As you can see in the sample, the formatting is basically done at this point, with the only remaining problems related to the sizing of photographs and captions. I decided to intrude a bit onto adjacent columns for more relevant photos (such as both of these) since the photo is very important to the look of the article.

Another new addition is the “Conductor’s Notes” section. This is a new feature that spun off from the original “site summary” boxes that I had intended to include. The end-result of those boxes was that they took up too much space. These new boxes look much better with the flag and easy-to read larger text. The information is also much more simplified. The “Active” dates are not just for the entire stop’s history, regardless of name changes. The GPS coordinates remain from the old version. “From” distances are simplified to simple averages worked out by analyzing around a hundred different time tables and agency books. The distance to Santa Cruz is nearly exact, but the distance to San Francisco is via the Mayfield Cut-off in most cases, and is subject to variance depending on the date. This fact will be explained in the earlier methods section and it may change by the final draft. The “Owner” section regards the current owner of the property. “Private residents” is code for “don’t ask because I’m not telling; don’t visit because it’s trespassing.” 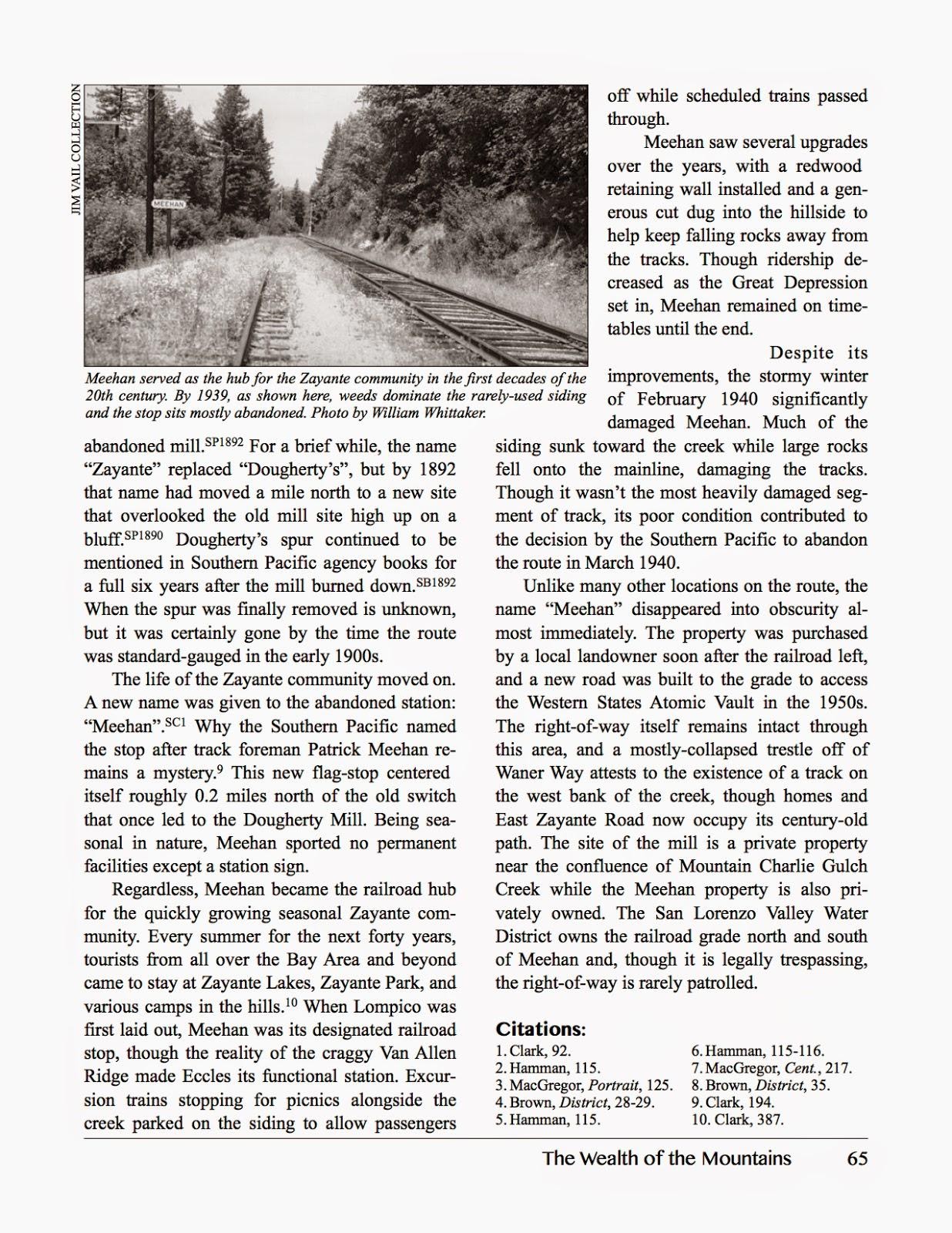 The citations, as I expected, are still the biggest source of annoyance. While I don’t want to turn to end-notes, these little hanging items are currently in two columns in smaller text at the end of the article. This is where they will stay, but longer quotations, which are inevitable, will require me to use multiple lines, something I really don’t want to do when possible. As for this list, Centennial was reduced simply to Cent. to fit on the page, while Water District was shrunk even further to District. Although neither of these prescriptions are unheard of in academic writing, I wish I didn’t have to do it here since it really shrinks the sources to their bare minimums.

That’s it for now. Feel free to open these images as their own pages and read through. Tell me what you think and what changes, suggestions, errors, clarifications, etc. you would perhaps like. This is still a first draft (though it is heavily edited) so let me know because I want to get it right for future articles. I only have about 99 to go! Cheers! Next time I write, I’ll be living in New Zealand!