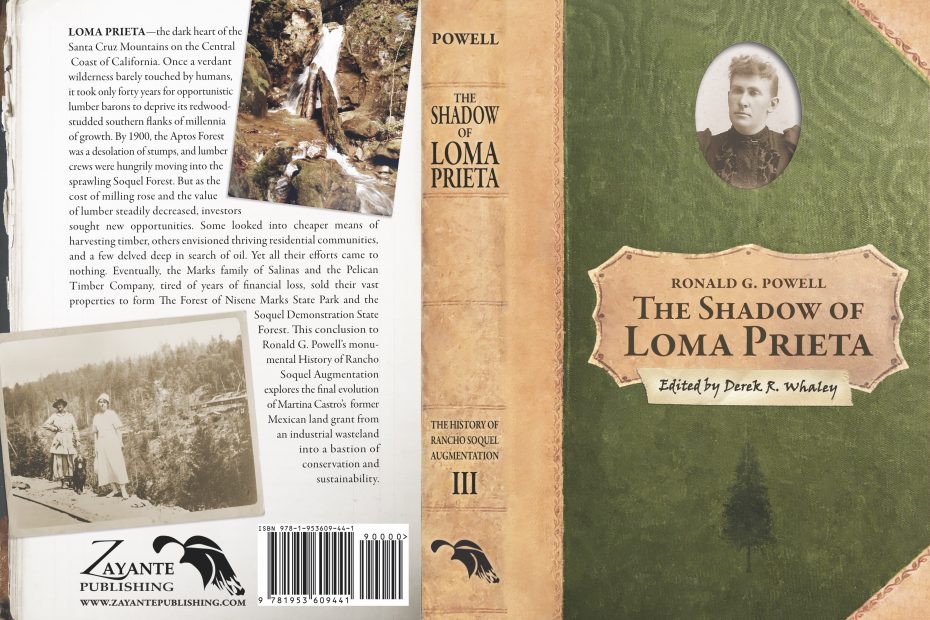 SANTA CRUZ, CA, October 23, 2022—The Forest of Nisene Marks State Park has a long history that has been largely forgotten. But not anymore.

The Shadow of Loma Prieta follows the tumultuous history of the areas now known as The Forest of Nisene Marks State Park and the Soquel Demonstration State Forest from the early twentieth century to the present day.

Expertly edited and expanded by local historian Derek R. Whaley, this book concludes the late Ronald G. Powell’s epic History of Rancho Soquel Augmentation trilogy that begins with The Tragedy of Martina Castro and continues in The Reign of the Lumber Barons.

Through first-hand accounts and interviews, newspaper articles, and personal explorations, discover how the once-bustling logging industry slowly declined and led to calls for the preservation of the Aptos and Soquel forests, until finally becoming the pristine playground for hikers and mountain bikers that exists today.

Follow the stories of the local logging entrepreneurs of the early 1900s as they raced deeper and deeper into the Santa Cruz Mountains, voraciously harvesting timber along Hinckley Creek, Bridge Creek, and Soquel Creek until nearly every single old-growth tree was gone.

Learn how, as the logging industry collapsed, opportunists continued to be drawn to the area’s natural resources—including real estate speculators, quarrymen, and oil prospectors—only to repeatedly find failure due to earthquakes, disastrous storms, and economic turmoil.

Finally, explore how, as these companies found themselves with a large tax burden and vast tracts of second-growth timberland, advocates for environmental protection began to speak up and demand that the Aptos and Soquel Forests be preserved for future generations, leading to the public spaces of today.

The Shadow of Loma Prieta: Part Three of The History of Rancho Soquel Augmentation by Zayante Publishing is now available for purchase from Amazon.com in print or as an ebook (Amazon Associates links).

From the back of the book

LOMA PRIETA—the dark heart of the Santa Cruz Mountains on the Central Coast of California. Once a verdant wilderness barely touched by humans, it took only forty years for opportunistic lumber barons to deprive its redwood-studded southern flanks of millennia of growth.

By 1900, the Aptos Forest was a desolation of stumps, and lumber crews were hungrily moving into the sprawling Soquel Forest. But as the cost of milling rose and the value of lumber steadily decreased, investors sought new opportunities. Some looked into cheaper means of harvesting timber, others envisioned thriving residential communities, and a few delved deep in search of oil. Yet all their efforts came to nothing.

Eventually, the Marks family of Salinas and the Pelican Timber Company, tired of years of financial loss, sold their vast properties to form The Forest of Nisene Marks State Park and the Soquel Demonstration State Forest.

This conclusion to Ronald G. Powell’s monumental History of Rancho Soquel Augmentation explores the final evolution of Martina Castro’s former Mexican land grant from an industrial wasteland into a bastion of conservation and sustainability.

Ronald Gabriel Powell was an electrical engineer and local researcher from Los Altos, California. He received his engineering degree from Cogswell Polytechnic Institute in San Francisco in 1953. For most of his career, he worked at Lockheed’s Missile Systems division, Rytheon, and GTE Sylvania. He retired in the late 1970s and started exploring and photographing The Forest of Nisene Marks. Around 1990, he began writing his long history of Rancho Soquel Augmentation and later donated his research to the McHenry Library at the University of California, Santa Cruz. Powell died on September 11, 2010 at the age of 79.

Derek R. Whaley is a historian, librarian, and former resident of Felton, California. He earned a doctorate in history from the University of Canterbury in 2018. He began researching Santa Cruz County history in 2011 and continues to do so from overseas. He has worked at the Santa Cruz Beach Boardwalk and The Tech Museum of Innovation, volunteered at the San Lorenzo Valley Museum and Santa Cruz Museum of Art & History, and is well-known for his Santa Cruz Trains book series and website. He currently lives in Aotearoa New Zealand.

About the afterword author

Jeff Thomson is the author of a guidebook titled Explore the Forest of Nisene Marks State Park. He is also on the Board of Directors of the Advocates for the Forest of Nisene Marks, a non-profit volunteer organization founded by local community members to support the park. The Advocates are a partner with California State Parks in driving fundraising and implementing capital improvements and special projects in the park. You can learn more about the Advocates by visiting their web site at www.nisenemarks.org.