Soquel and its Lumber Lords 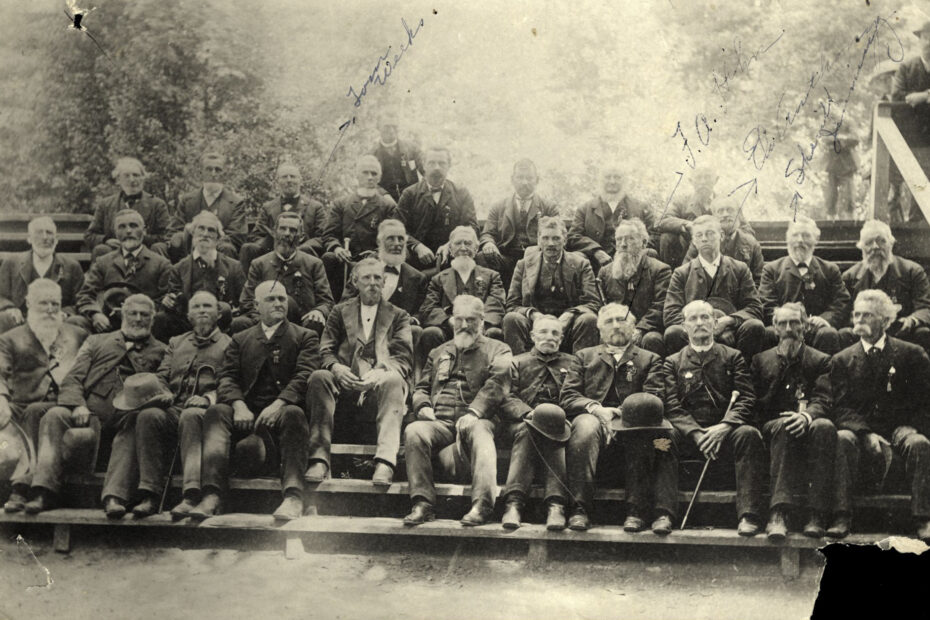 With The Tragedy of Martina Castro now released, I have moved on to working on the next book in the series: The Reign of the Lumber Barons. Ronald Powell did not separate his story into volumes or separate stories, but the sheer breadth of information that he covered requires it to be divided. As a result, the middle book is a very different story than the first. Where the first focused on Soquel in the Mexican and early American periods of California history, as well as Martina Castro and the legal problems that haunted the later half of her life, the second book is primarily concerned with three things: wealthy capitalists, railroads, and the lumber industry within Shoquel Augmentation. 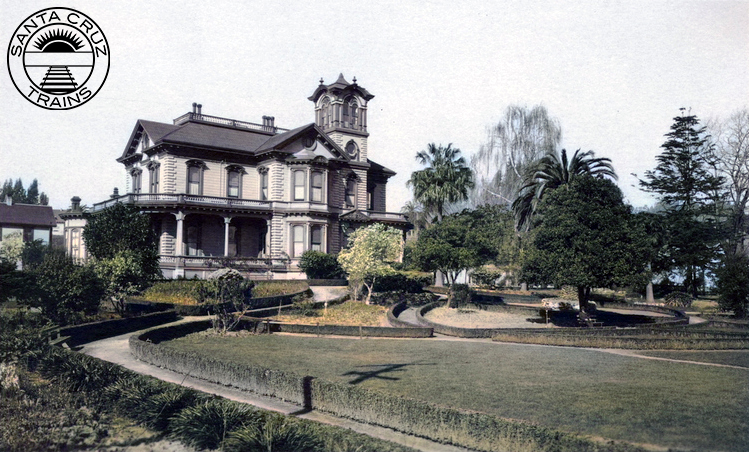 I expect the length of the book to be similar to the first, but there are many differences in its composition. First, there are more maps! Part One had a total of 54 figures sprinkled throughout. Part Two has approximately 75 maps, most of which show the routes of roads and railroad lines in the Augmentation. The story itself is also split: the first two chapters focus primarily on Frederick A. Hihn’s project to get a railroad built in Santa Cruz County; chapters 3-6 focus on the lumber operations within the Augmentation; and chapter 7 tells of the decline of the large-scale lumber operations along Soquel and Aptos Creeks and their tributaries at the end of the 1890s. The book will not have an epilogue but rather an extended appendix written by Powell that examines the intricacies of operating a lumber mill in the Santa Cruz Mountains. The end cap is an extensive glossary of lumber terms that I have already revised to ensure spelling and usage remains consistent throughout my rewrite of Powell’s manuscript. This glossary will be available for free at some point in the near future. 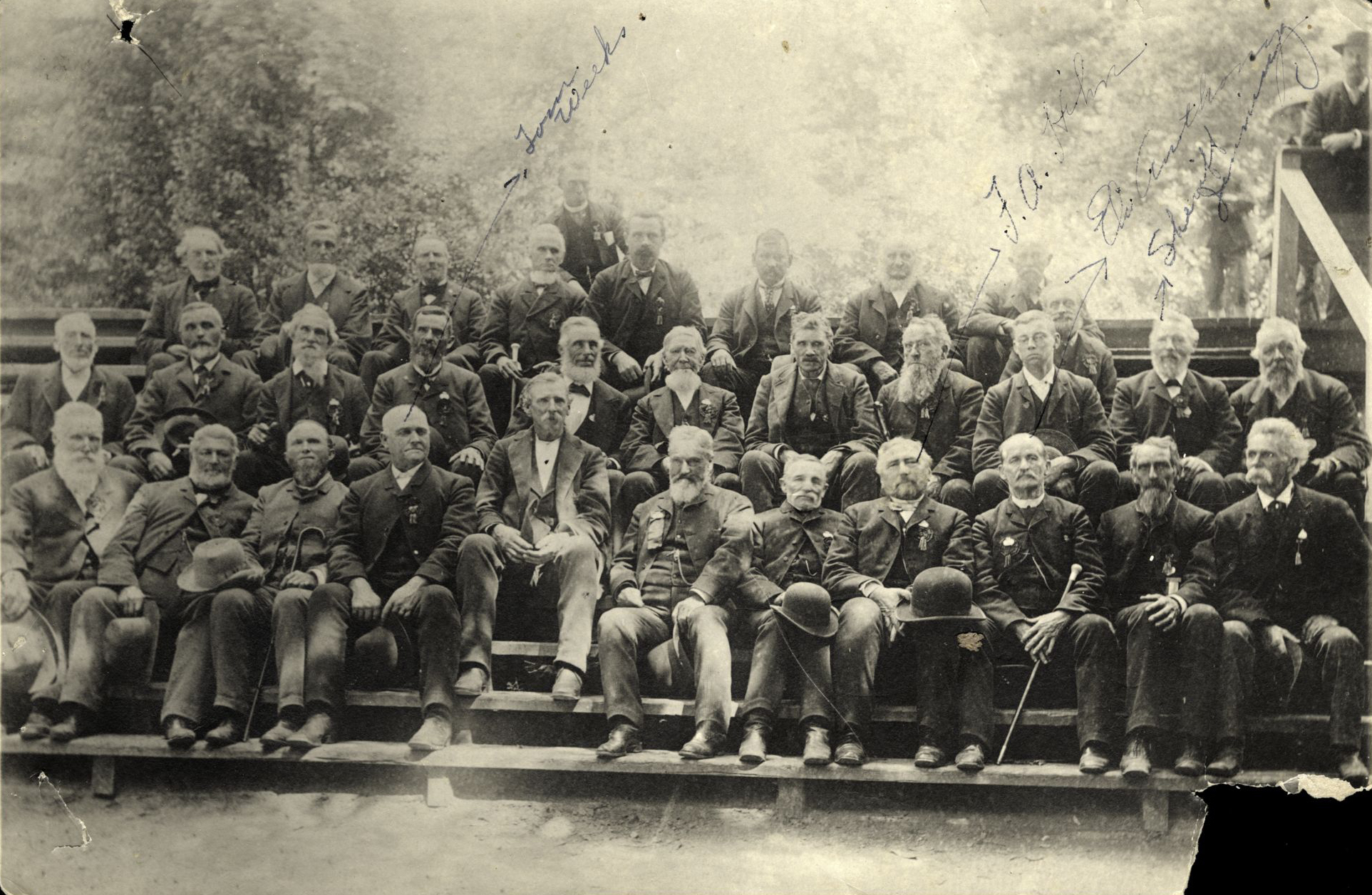 The title of the second volume, The Reign of the Lumber Barons, is a reference to the wealthy capitalists, landowners, industrialists, and entrepreneurs who invested heavily in local lumber ventures in order to harvest the timber located within Shoquel Augmentation. The foremost among these people was Hihn, who owned the majority of the Augmentation and a large percentage of Rancho Soquel, upon which he built Camp Capitola as the crowning visible achievement of his landed empire. But the truth of the matter—and something Powell knew well—is that the story of local railroading and lumbering were inextricably linked to Hihn.

To summarize, Hihn purchased and acquired his Soquel properties gradually, as documented in The Tragedy of Martina Castro. He didn’t do much with them initially, however, choosing to save them for future use. By the late 1860s, he realized that a railroad would be the most efficient means by which he could harvest the thousands of acres of timber along Soquel, Aptos, and Valencia Creek that he owned. Thus, he began petitioning the county and its residents for a railroad, and the public seemed keen. But other companies popped in and out, delaying progress, and funding was always an issue. As a result, he became a state assemblymember and used his two years in office to try to get railroad bills passed that would benefit Santa Cruz County. He failed and did not seek re-election, instead using his increased status to petition the Southern Pacific Railroad to build the line. When they declined, he did it himself, recruiting other local investors such as Claus Spreckels, Benjamin Porter, Jacob Kron, and Richard Kirby to help pay the bill. 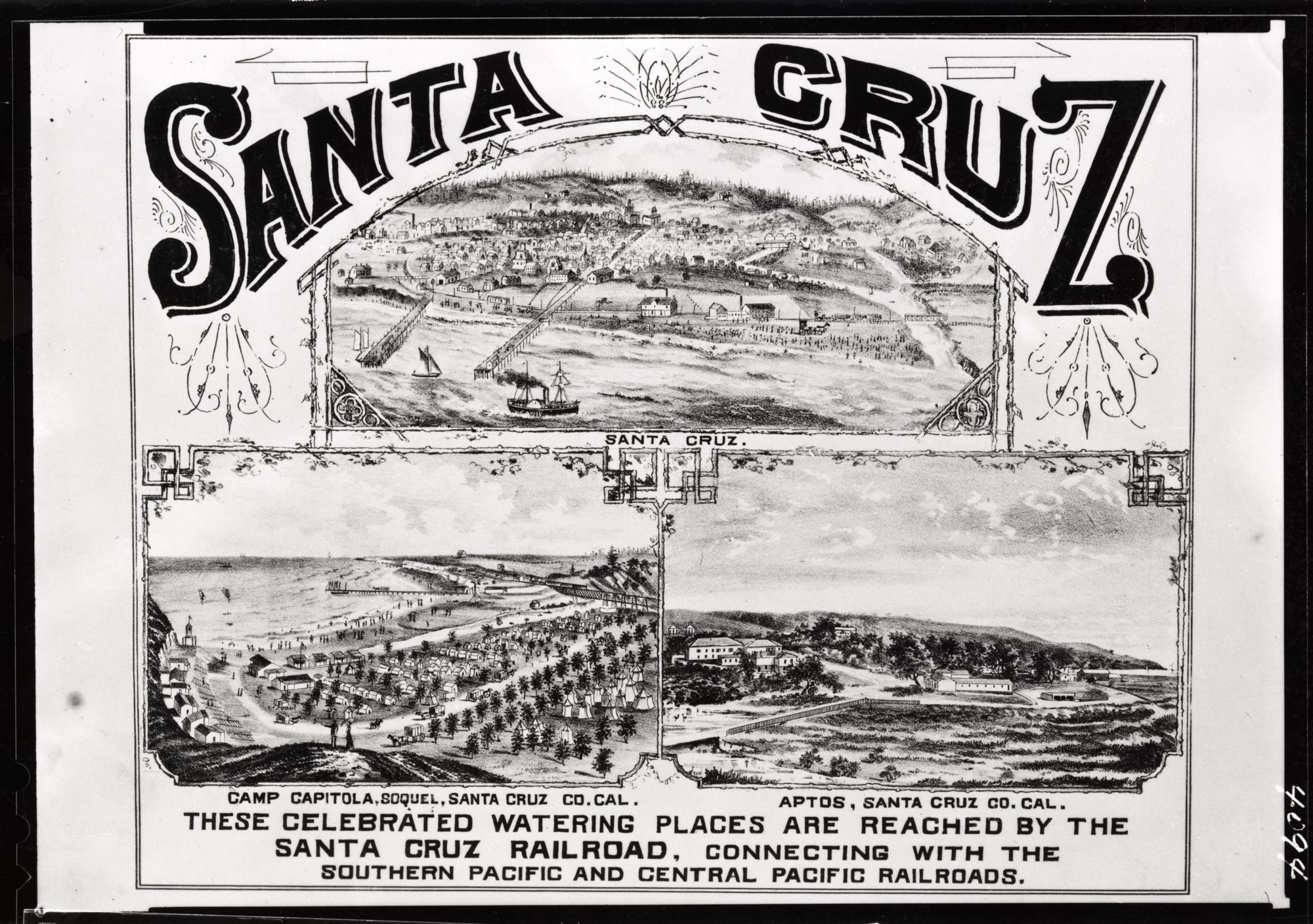 Despite becoming a tremendous failure, the Santa Cruz Railroad succeeded in its one goal of convincing Southern Pacific of its potential. For Hihn, it succeeded in linking his timber tracts to the main railroad network at Pajaro. The South Pacific Coast Railroad through the Santa Cruz Mountains, which Hihn had little input in but may have helped negotiate the route, also benefited him by passing through the headwaters of Soquel Creek at Laurel. Between these two routes, as well as via the Old Felton Branch to Gold Gulch and the Boulder Creek Branch and Dougherty Extension to Kings Creek, Hihn was able to link his otherwise distinct properties together and reach nearly every corner of his valuable timberlands. He built his own private branch lines up Valencia Creek, Bridge Creek, and Gold Gulch, down Laurel Creek, and along the headwaters of Bridge Creek via a skyline connected to the Molino grade. Ultimately, Hihn benefited the most from the railroad because of its proximity to his lands in the Augmentation.

That being said, Hihn was not the only lumber baron. The founders of the Loma Prieta Lumber Company, which often rivalled but equally cooperated with Hihn’s firm, included many of the county’s prominent individuals, including John T. Porter, William P. Dougherty, Alvin Sanborn, Charles Ford, and A. C. Bassett. Bassett represented the interests of Southern Pacific, which was heavily invested in the venture via Timothy Hopkins, an adopted son and heir of the late Big Four member Mark Hopkins. He worked with the Santa Cruz Railroad and, after its acquisition in 1881, Southern Pacific to build a short-line railroad up Aptos Creek and into the heart of the Augmentation, where Carmel and Thomas Fallon, as well as other property owners, sold the harvest (stumpage) rights to their timberland to the lumber company. The railroad Bassett built proved to be one of the most expensive per mile ever built by Southern Pacific, especially considering its sole purpose was as an industrial route. But Powell discovered that the value of timber was such that the lumber company itself paid for the lines extension in every direction. He discovered that it had short-lived spurs all over the Aptos Creek basin, crisscrossing the creek in places and switchbacking high on hillsides and along gulches. 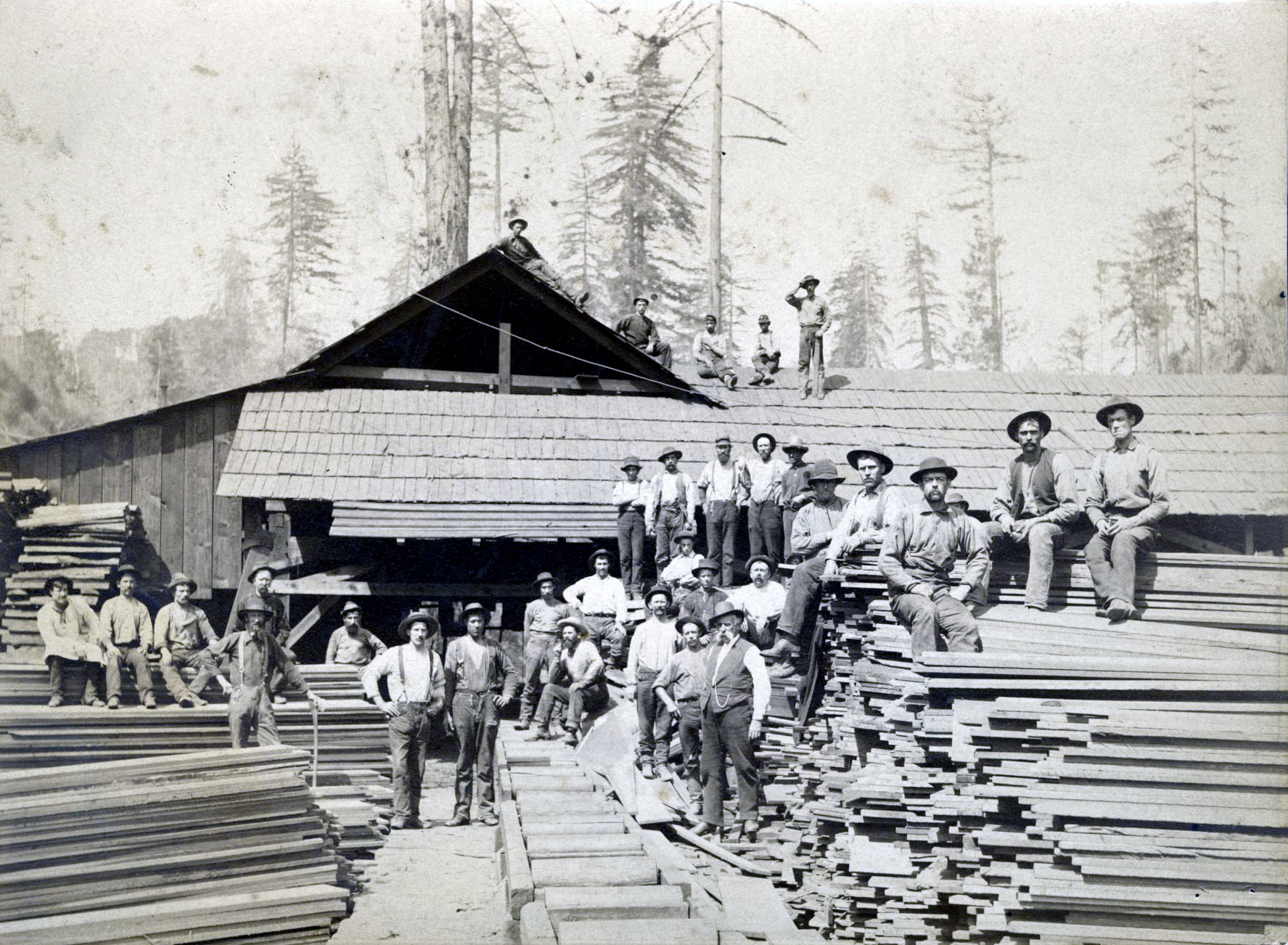 The Grover & Company mill at Grover Gulch along a branch of Soquel Creek within the Augmentation, ca 1890. Photo by A. W. Fell [UCSC Legacy Digital Collections – colorized using DeOldify]

In addition to the big names, there were lesser lumber barons too—people who harvested their tracts and then repurposed them, or who maintained small operations within the Augmentation. Up on the Summit, Brad Morrell and Charles McKiernan continued to harvest timber both within and outside the Augmentation well into the 1870s. Around the same time, the Comstock brothers built a large shingle mill off the Soquel Turnpike (Soquel San Jose Road), and the Chase family established a mill just to the south along Hester Creek, as well as another off Highland Way, all within the Augmentation. The Grovers were the largest of the smaller operators in the Augmentation and initially worked with Charles Olive to harvest timber. In 1875, the family bought the stumpage rights to the Averon family’s land and harvested this large tract over the next twenty years, earning its name Grover Gulch. 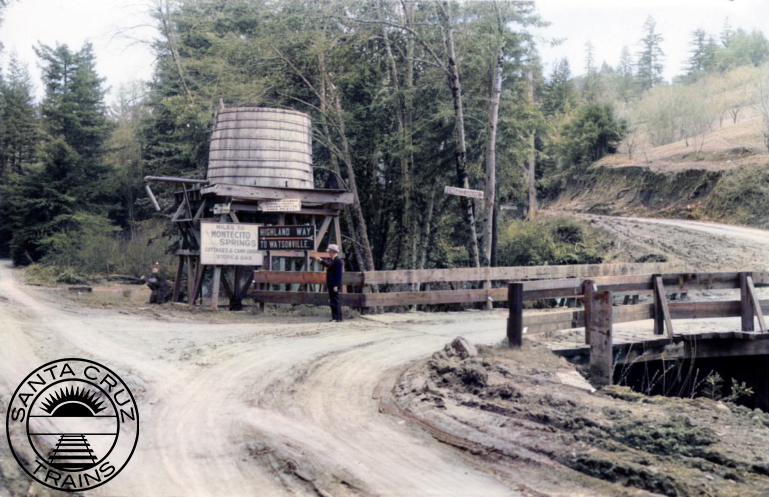 The reign of the lumber barons was relatively short—about 30 years—but they made a massive impact on Santa Cruz County history and the history of Shoquel Augmentation in particular. This second book will dig deep into these intricacies and examine primary documents that discussed the benefits of harvesting the forest, the pitfalls and dangers, and the politics that were involved throughout the process. It will also look much closer than ever before into the people who ran these operations and how they worked from day to day. In the end, it will pull back the curtain on a region poorly discussed in history books and often misunderstood. Over the next several author diaries, I will go into more details about the structure of this book, Powell’s methods and discoveries, and what I have done to prepare his work for publication.

The Tragedy of Martina Castro: Part One of the History of Rancho Soquel Augmentation is available now from Amazon.com. Get your copy at https://amzn.to/2V8wXx5.