The second article I wrote for my book, way back in September, was the “Santa Cruz Union Depot & Freight Yard”. It was an ambitious article forced early because I was writing my articles in geographic order, beginning with the Santa Cruz Wharves and ending five miles north of Boulder Creek (after a detour to Los Gatos and Vasona). Almost immediately, however, I found myself buried in too many details. The article encompassed more material than any other single location on the local railroad lines (with the exception of Watsonville, which is outside the spectrum of this current work). The next closest location was Los Gatos, which I was able to handle remarkably well in comparison. Review of the article by my editor proved to me that it had to be rewritten, at least in large parts. I set the article aside and continued with the remainder of them.

That was then, now I’m back at the article, hacking away at it like a weed. Two days ago, though, I made the final fateful decision that the article needed to be split up. There was simply too much material to include in a single article, and a combined article would keep it confusing to the common crowd. Thus, where once there was one, there is now three. I’ve sectored the Santa Cruz Freight Yard into three distinct parts, which roughly correspond to the progression of businesses that operated within and around the yard. The map below demonstrates a crude outline of these divisions: 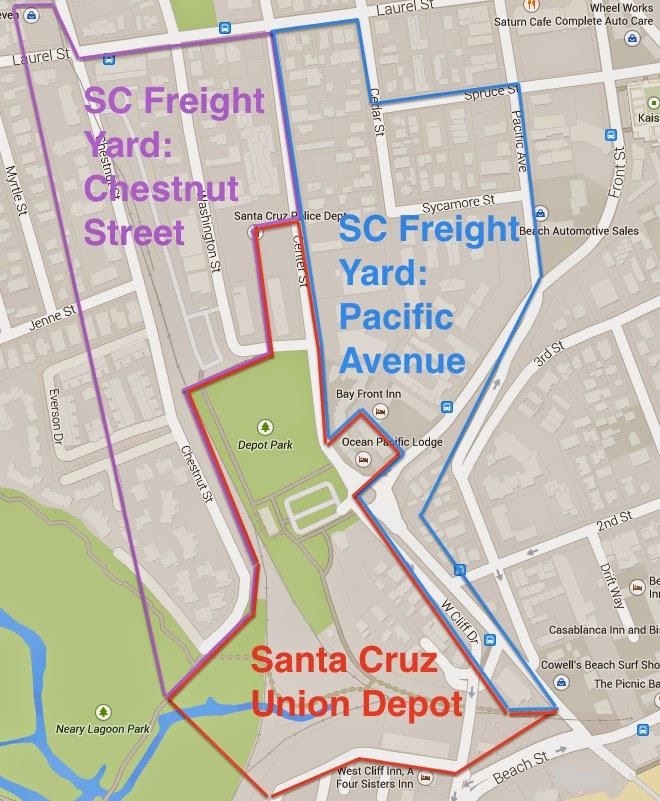 The southern division will be the first in the book, marking the site of both the original South Pacific Coast depot as well as the Santa Cruz Union Depot following the merger of the two depots that were previously located at Cherry and Park Streets on the north side of Chestnut Street. This article will also address the roundhouse, the turntable, the freight depot, the Ocean Shore Depot, the wye, and the abundant sidings and spurs located near the Neary Lagoon outlet. It will also include a few industrial spurs, though only a few, as well as the Railroad Exchange Hotel, which is where the Ocean Pacific Lodge is today.

To the east, Pacific Avenue will provide the context for the second article. Pacific Avenue is actually the oldest part of the freight yard, although it was also the first to be abandoned. Businesses sprang up along it beginning in 1875 when the Santa Cruz & Felton Railroad ran its freight cars through downtown to get to the beach. A horsecar service, located on Sycamore Street, took over the downtown route while the former right-of-way from there to the main yard became freight track for a number of lumber firms and a flour company. Most of the space outlines in blue on the map was dominated by lumber yards until the early 1910s. A portion of this article will overlap with the Union Depot article because the lumber yards often spread across roads, such as Washington Street.

The third and final article is the one I have been working on the hardest because it contains the largest concentration of businesses. Starting around 1900, warehouses began popping up along Chestnut Street just south of Laurel (with one exception). Most of these had their own or shared sidings and spurs. And since space was tight, most businesses had to wait for another business to leave before they could move in. Thus, there is a constant progression of freight businesses along this stretch all the way until 1990, when everything was demolished and replaced with track homes. Much like the Pacific Avenue section, there were multiple lumber yards on the east side of Chestnut Street that will also be addressed in this article, some yards of which stretched into neighboring areas.

So that is the task I have set out for myself. It’s not an entirely fun project, to be honest. Rewrites are hard work, and this one is requiring all of my research skills to accomplish, taking a lot of time when I was hoping to be winding down the research side of things. That being said, I can’t let a half-completed article get through without a fight. Parts of my book are weak, but this shouldn’t be one of those.