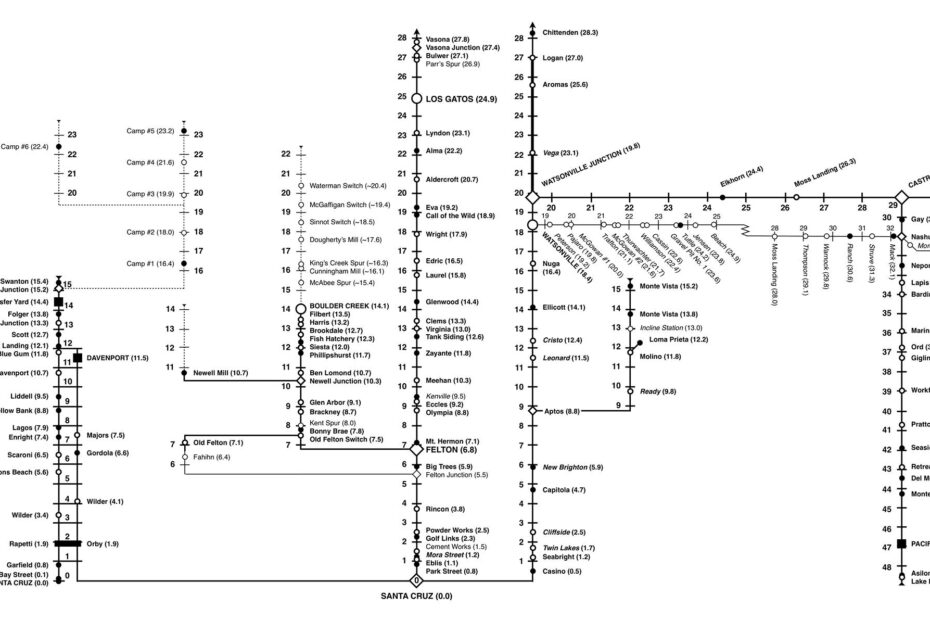 When I began researching local railroads, my goals were very simple and geographically isolated: I wanted to write blog posts about the railroad routes that were directly related to me. Since I lived and grew up in Felton, that meant first and foremost the Roaring Camp Railroads line to Santa Cruz. Naturally, this topic would conclude at the Boardwalk. However, I also wanted to investigate the route over the mountains to Los Gatos. I didn’t have a geographical endpoint in mind, but Vasona sounded natural since that’s where the tracks still sit today. In hindsight, it really is more of a convenient location than anything noteworthy, since Vasona did not exist in 1878, when the South Pacific Coast Railroad first came into the area. Had I gone one station further north—Campbell—I would have run into the problem of including the entire New Almaden Branch in my studies, which never really interested me (and still doesn’t). This would have also skipped the Los Altos Branch (Mayfield Cut-Off), which was even more outside my area of interest. Both routes are arguably in—or at least adjacent to—the Santa Cruz Mountains, so could conceivably be within my topic’s research bounds, but I just didn’t want to go there. I had no personal connection to either branch line and was already stretching me interests to their extremes. So Vasona became the northern terminus of my research and the Boardwalk my southern terminus.

Next came the issue of the Boulder Creek Branch. Although I grew up in the San Lorenzo Valley, I was very much a south valley guy. I rarely ever ventured further north and I initially lacked the interest to go there. Fortunately, a few discoveries changed my mind. First, I found the old railroad right-of-way north of Felton along the San Lorenzo River. Second, I had been volunteering at the San Lorenzo Valley Museum in Boulder Creek and had seen photos of the valley’s railroading heritage. But most definitively, I was told where to find actual ties still in the ground near Waterman Gap far north of Boulder Creek. The Boulder Creek Branch suddenly became my favorite place to explore in the mountains. By the time I began planning my book, Santa Cruz Trains: Railroads of the Santa Cruz Mountains, I knew that the entire San Lorenzo Valley would be included in my study.

As almost an afterthought, though, one of my first places of interest, the Boardwalk, was also dropped. Whether this was foresight, anticipating the success of my book and the need for a sequel, or sheer force of will, realizing that the stop sat outside the bounds of my research area, it had to go. Thus, the areas covered by my book were decided and the geographic boundaries fixed. Section 1 would cover the original Santa Cruz & Felton Railroad route between the Santa Cruz Wharf and Old Felton, Sections 2 and 3 would cover the South Pacific Coast Railroad’s route between Big Trees (Henry Cowell) and Los Gatos (ending at Vasona), and Sections 4 and 5 would cover the Boulder Creek Branch and the Dougherty Extension Railroad. A few things accidentally got left out, such as the Santa Cruz Lumber Company’s private railroad that operated atop the Waterman Gap and a failed cement plant in the Potrero area of Santa Cruz, but at least the boundaries were set in stone.

This new book, Santa Cruz Trains: Railroads of the Santa Cruz Coast, forced me to have another look at the geographic boundaries of the railroads in the county. For once, I had a hard boundary to the north at Swanton, where the Ocean Shore Railroad ended from 1908. That part was easy. Similarly, I knew that the entire route between Pajaro and Santa Cruz would be included, as well as the Loma Prieta Branch that once wandered into the Forest of Nisene Marks. But I was very uncertain regarding where to go from there.

Initially, I intended to include the entire Monterey Branch, and I even wrote articles on the topic. But I ran into opposition from Dave Hambleton, the resident railroad expert for that area. Although I completed my blog posts for the branch, I decided to retreat back to Pajaro and reassess the situation. Without the Monterey Branch, covering anything to the south seemed unnecessary. Since Rick Hamman was the only local researcher to cover the Pajaro Valley Consolidated Railroad in his Steinbeck Country Railways, I decided to try that topic next, but once I reached Nashua, where the tracks crossed the Monterey Branch tracks, I stopped again. Going any further would bring me into the Salinas area, and that was definitely outside my desired geographic boundaries. The Salinas Valley has Southern Pacific tracks that run its entirely length into San Luis Obispo County, and that was too far for my interests and too difficult to research. Again, I retreated.

Finally, I decided to follow the route to Carnadero, just south of Gilroy, where the original line to Pajaro begins. For some reason, this felt right. The range avoided the Hollister Branch, again something outside my interests, but included the lands of Miller and Sargent, ranchers who had connections with the Pajaro Valley. Furthermore, this line included Chittenden, which is in Santa Cruz County, and Logan, which shares a long history with the people of Watsonville. Thus, my boundaries to the east and to the south were finally decided upon. The only question remaining was what to do with the San Juan Pacific Railway? This upstart 1907 route between Chittenden and a cement plant south of San Juan Bautista was entirely dependent on the route I was covering in my new book. But the route itself was almost entirely in San Benito County and Rick Hamman wrote fairly extensively about it in his California Central Coast Railways. I decided, like the Pajaro Valley Consolidated Railroad which initially began in Watsonville, that the San Juan Pacific was just a tad outside the parameters of my project. Plus, researching the Pajaro to Carnadero route was going to difficult enough since it is an active Union Pacific track through an area I am unfamiliar with. Including another route in unfamiliar terrain just seemed like a bad idea.

The end result of all of this is that my upcoming book closely resembles the layout and format of my first book. Section 1 in my upcoming book covers the oldest railroad, the Southern Pacific, as it made its first link to Santa Cruz County just as Section 1 in my older book covered a pioneer railroad that linked the redwood tracts in the mountains with the steamships at the wharf. Sections 2 and 4 of the new book will cover the Santa Cruz Railroad’s route, which connected the Bay Area to Santa Cruz via a coastal track, just as Sections 2 and 3 of my old book followed the South Pacific Coast as it connected Santa Cruz to the Bay Area through the mountains. Sections 3, 5, and 6 in the new book compare closely to sections 4 and 5 in the old book in that all follow short-line railroads built primarily to connect specific industries to the main line. In the case of the old book, that industry was lumber, while the new book will focus on both lumber and cement. Sections 3 and 5 in the new book also cover official Southern Pacific Branch lines, including the small Loma Prieta Branch, just as Section 4 in the old book covered the Boulder Creek Branch and the tiny Newell Creek Branch (regrettably unworthy of a section of its own). Lastly, Section 6 of the new book will cover the privately-operated San Vicente Lumber Railroad (and the Ocean Shore trackage built to reach said railroad) just as Section 5 in the old book covered the privately-owned Dougherty Extension Railroad.

These comparisons may prove useful when reading both books, but they also show a continuity of industries in Santa Cruz County. Where there are redwood forests, there are people desiring to harvest them. Where there are fields for agriculture, people will grow things. And where there is limestone and mineable rock, there will be quarries and refineries. The unintended parallelism between these two books will surprise many, but will also allow a much better reading experience. Or so I hope. ☺️