Two Trilogies to Rule Them All, Part 1 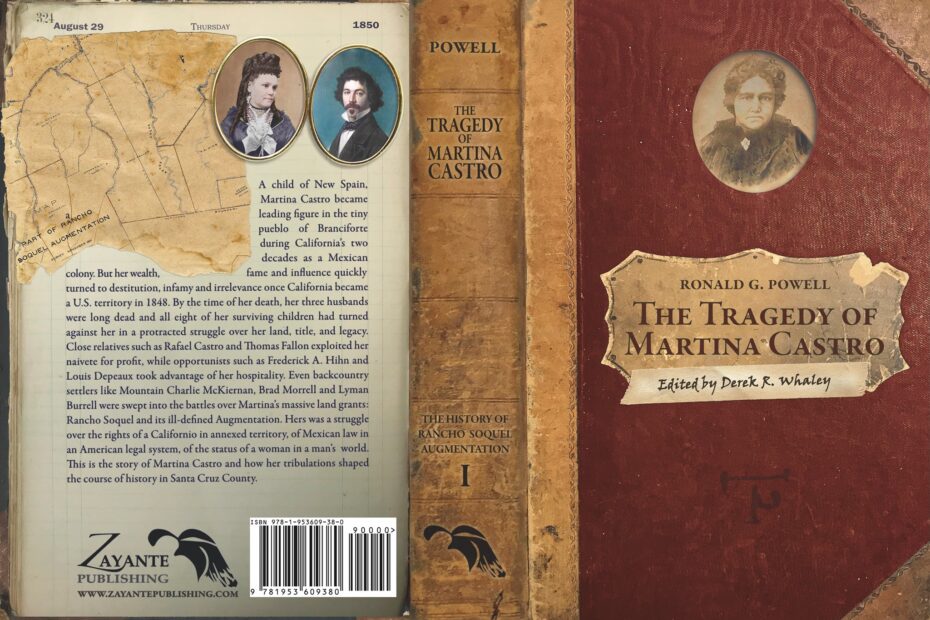 It has been a very strange year and I think this is something everyone on Earth can agree on. For me personally, I went from making quite a lot of progress on several projects to being stuck at home and then redeployed to Auckland Emergency Management for two separate lockdowns (the second redeployment was only two weeks, fortunately). Despite having some extra time at home during all of this, I actually made much less progress than planned owing largely to the confusion and psychological stress of everything and the fact that I moved houses in the midst of it all. The good news is that I just finished writing an academic journal article on a short-lived New Zealand horse tramway. I did this in my role as a Research Librarian at Auckland Libraries. Once that article is published, I will be sure to do a cross-post so everybody can give it a gander, even if it’s a bit off topic.

To bring things back on topic, I have had a lot of random free time since my last author diary and that has given me time to reflect on various aspects of my two major Santa Cruz County history projects: the Santa Cruz Trains book series and my adaptations of Ronald G. Powell’s history of Rancho Soquel Augmentation. On both fronts, I have some exciting news that was unexpected and will predictably delay things, but all for the better! Since I am unable to return to the United States for a visit until either New Zealand’s immigration laws change or I establish permanent residency here (next October), I can’t complete my research on the Santa Cruz Trains books. I will explain more on that next week. Fortunately, The History of Rancho Soquel Augmentation is going full-steam ahead since it has no such issues. So this is where my first news comes in: there are going to be three Powell books.

I assure you this was not predicted or even desired.

Ron Powell basically tells two stories in his magnum opus: (1) the tragedy of Martina Castro and (2) the destruction and revival of the forests within Rancho Soquel Augmentation. My adaptation of The Tragedy of Martina Castro is now completed and I am awaiting the proof copy to arrive for final corrections. It will be available in both print and ebook and will cost $24.99 (this is more than I hoped to charge for it but the book is thick and that is all that matters to Kindle when it comes to cost). I hope to issue a formal press release in two weeks and it should be available in local bookstores by the end of October.

As I wrapped up work on the first Powell book, I began the tedious process of transcribing the poorly-OCR’d PDFs of his remaining volumes into Microsoft Word. I even hired some help so the task didn’t slow me down so much. I also extracted roughly 150 handmade maps, all of which needed heavy clean-up due to the poor quality of the original scans (only half are currently fixed). The maps were the first clue that my second book may not work as intended since I had grossly underestimated how many maps there were. After transcribing the last of the material from Powell, as well as a comprehensive guide on every possible aspect of logging in the Santa Cruz Mountains (it’s very thorough and enlightening), it became obvious that I had well over 1,300 pages of material including the maps. Kindle print books are limited to 800 pages maximum. The results were clear: I had more than two books on my hands: I had three. Such is life.

Thus, Ronald G. Powell’s The History of Rancho Soquel Augmentation is now a trilogy composed of The Tragedy of Martina Castro, The Reign of the Lumber Barons, and the new third book in the series, The Shadow of Loma Prieta. I’ve spent most of my free time over the past two weeks working on the back blurbs and covers for the second and third books. The third book’s cover is not quite done, but I just put the finishing touches on the second book’s cover last night. You can read the blurbs for all three books below and check out the full covers for the first two books. Let me know what you think! 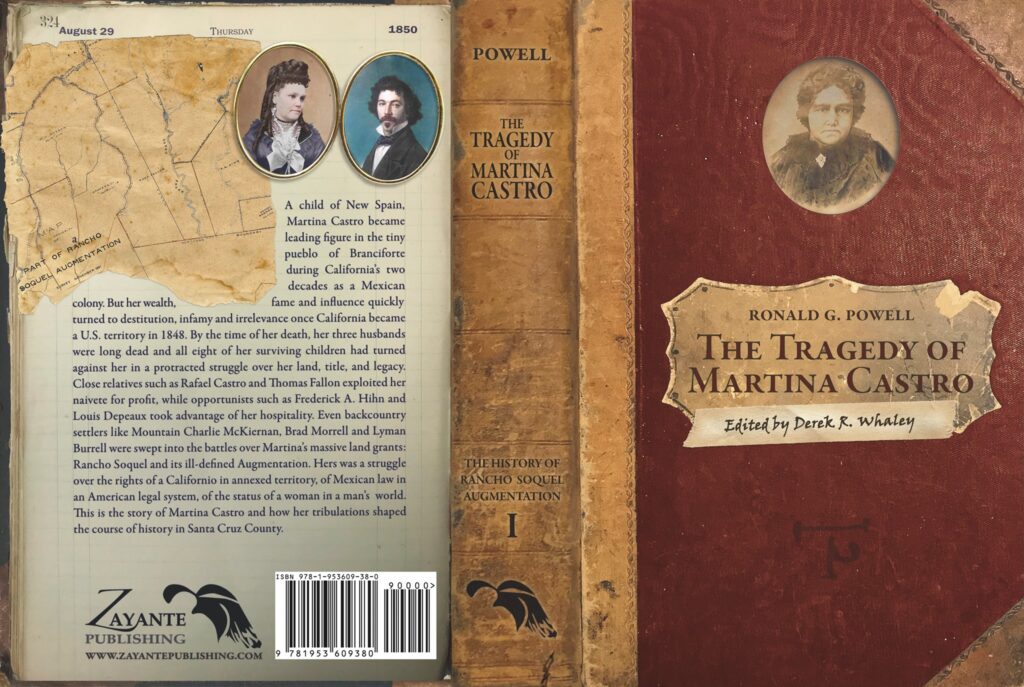 A child of New Spain, Martina Castro became a leading figure in the tiny pueblo of Branciforte during California’s two decades as a Mexican colony. But her wealth, fame and influence quickly turned to destitution, infamy and irrelevance once California became a U.S. territory in 1848. By the time of her death, her three husbands were long dead and all eight of her surviving children had turned against her in a protracted struggle over her land, title, and legacy. Close relatives such as Rafael Castro and Thomas Fallon exploited her naivete for profit, while opportunists such as Frederick A. Hihn and Louis Depeaux took advantage of her hospitality. Even backcountry settlers like Mountain Charlie McKiernan, Brad Morrell and Lyman Burrell were swept into the battles over Martina’s massive land grants: Rancho Soquel and its ill-defined Augmentation. Hers was a struggle over the rights of a Californio in annexed territory, of Mexican law in an American legal system, of the status of a woman in a man’s world. This is the story of Martina Castro and how her tribulations shaped the course of history in Santa Cruz County.

THEY CAME WITH AXES. THEY CAME WITH OXEN. THEY CAME WITH GREED. In the forests along Aptos, Valencia, and Soquel Creeks in Santa Cruz County, California, miles of wilderness sat untouched by humans, a relic of Mexican land grants long neglected. But entrepreneurial and ambitious men saw in the endless tracts of coast redwood something valuable and worthy of exploitation. From the 1860s, they sent in legions of fellers and woodcutters, millwrights and sawyers, gulchers and greasers. Skid roads gave way to railroads as they carved labyrinthine paths through impossible terrain to reach the heart of the Santa Cruz Mountains. Boomtowns arose at Loma Prieta, Valencia, and Laurel, and timber camps dotted the range. It was the domain of the lumber barons, frontier pioneers of endless vision who sought to tame the untameable, men such as Frederick A. Hihn, John T. Porter, and Charles Ford. Through their wealth and influence, they came to control the reins of power in local government and their decisions directed the fate of all in Santa Cruz County. 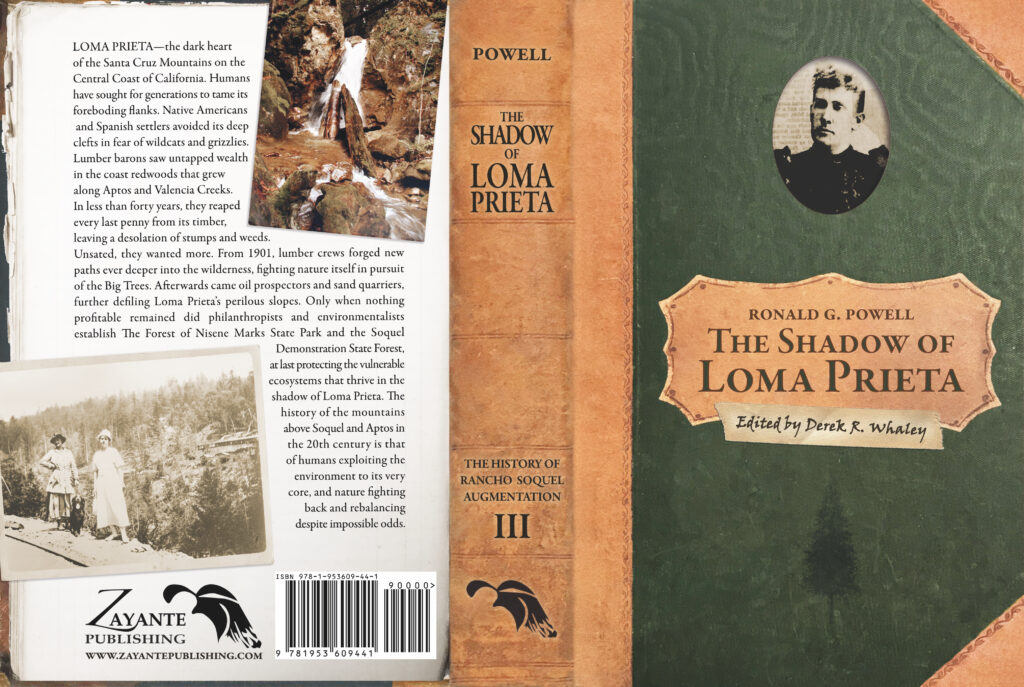 LOMA PRIETA—the dark heart of the Santa Cruz Mountains on the Central Coast of California. Humans have sought for generations to tame its foreboding flanks. Native Americans and Spanish settlers avoided its deep clefts in fear of wildcats and grizzlies. Lumber barons saw untapped wealth in the coast redwoods that grew along Aptos and Valencia Creeks. In less than forty years, they reaped every last penny from its timber, leaving a desolation of stumps and weeds. Unsated, they wanted more. From 1901, lumber crews forged new paths ever deeper into the wilderness, fighting nature itself in pursuit of the Big Trees. Afterwards came oil prospectors and sand quarriers, further defiling Loma Prieta’s perilous slopes. Only when nothing profitable remained did philanthropists and environmentalists establish The Forest of Nisene Marks State Park and the Soquel Demonstration State Forest, at last protecting the vulnerable ecosystems that thrive in the shadow of Loma Prieta. The history of the mountains above Soquel and Aptos in the twentieth century is that of humans exploiting the environment to its very core, and nature fighting back and rebalancing despite impossible odds.
——————————
The templates for all three books is a ledger book held by Auckland Libraries that I have manipulated in various ways to work as a cover. The books also reflect a progression in quality. Where the first book is rather tatty with tears, scores, and other blemishes across its face, the second book is much cleaner and the leather is lighter. The third book will ideally look almost new in comparison. The same goes with the back cover, where the quality of the ruled paper is improved between books. All of the props on the back cover are customized from original material held by various collections cited within the front matter of the book. The photographs that will appear on the back of the third book include a Molino Timber Company photograph from the 1910s and a photograph of a waterfall taken from within The Forest of Nisene Marks by Powell in 1981.

One of the annoying problems I have encountered regarding the cover of the third book is that the woman after whom The Forest of Nisene Marks is named—Nesime Bonde Marks—was not photographed much in life. The only photograph I have so far found of her is from a 1962 The Californian newspaper article, and the quality is quite poor. If you know of any decent quality photographs of Nesime Marks, please let me know as I would love to include it in the portrait window on the cover of The Shadow of Loma Prieta.

I am abandoning giving timelines for the release of the second and third books. With all of the uncertainty in the world right now on top of having a full-time job and a few other projects on the side, giving estimates is a fool’s game. My hope (and it is only a hope) is that The Reign of the Lumber Barons will release sometime around March/April 2021 and The Shadow of Loma Prieta will release around September/October—basically six months between each volume. But again, this is a hope, not a schedule. These sequels will benefit from everything I learned while preparing the first book, such as how best to prepare an ebook.

For news regarding the future of Santa Cruz Trains, stay tuned for the other half of this overlong author diary next week!