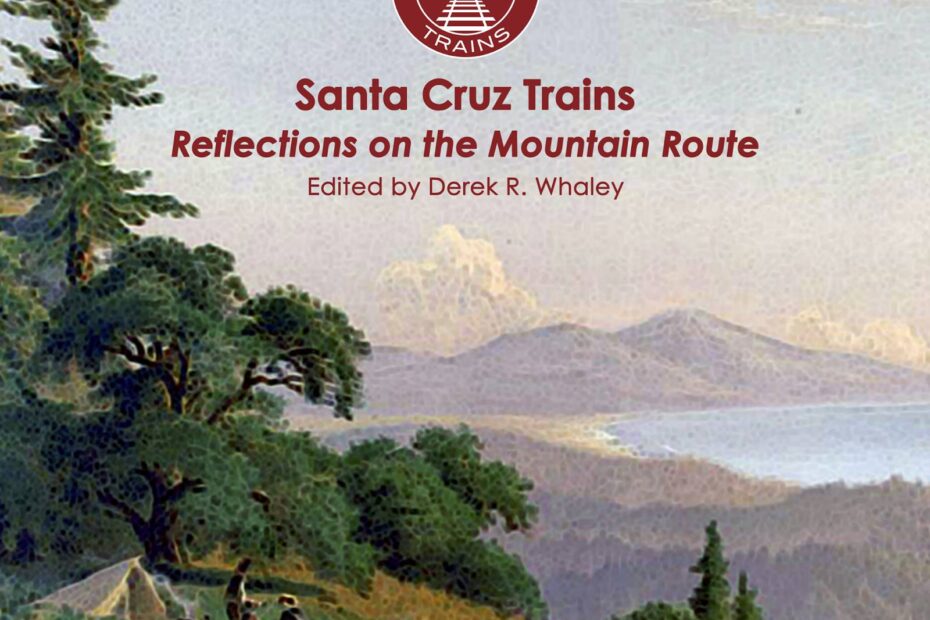 Writing history has often unexpected consequences. Sometimes you discover dark secrets and the reasons why they were hidden. Other times you reveal new information that completely changes how humans view something. And often you find out that a single book is just not enough…

When I began my blog in 2012, I did not anticipate a book. I was desperately looking for a better-paying job that used my talents and the local train blog I created had almost no long-term plans or scope. By the end of that year, I got my first inkling of a book. It took the better part of 2013 to become fully realized, but it inevitably happened and the scope was fairly easy to define: I would write about the railroad route from Santa Cruz through the mountains, and include everything in the San Lorenzo Valley. The only real question was where to end it on the north side of things. I settled upon Vasona – where the line split to Mayfield from 1908 – and then I set about the task of researching and writing the book.

About a year after Railroads of the Santa Cruz Mountains was published in February 2015, I got the idea for another much shorter book. I had been doing more research for my blog and doing fairly regular revisions to the published book and, throughout that process, I was given or found many more photographs on my book’s subject. Most of these photos had never been published anywhere and it seemed lame that they may never see publication. I started to look for some way to make them available in a small coffee-table book and the idea came to me to pair the photos with contemporary quotes, which I had frequently run across in my research and I often found exceptionally funny or poetic (sometimes both). People at the turn of the century really loved their flowery language. This became Reflections on the Mountain Route, released in November 2016.

By this point, the idea for Railroads of the Santa Cruz Coast was already fully in mind. It would be an ambitious project and one not quite so close to me since I lived in Felton for most of my life. Santa Cruz, Capitola, and Watsonville, as well as the other population places in the county, had always been places I visited or, later, worked, but they did not have the same personal connection. Nonetheless, I realised that the same methodology and approach of my first book could be applied to virtually any railroad line, and documenting the station and usage history of the coastal lines within and around Santa Cruz County quickly became a priority. For over a year, I wrote articles on my blog that could function as samplers and test cases for this book. Investigating the various freight providers especially proved important, as did making connections to residents in the Watsonville and Capitola-Aptos areas, who had little information and few photographs to contribute to my first book.

While doing all of this, I also was researching and writing my doctoral thesis in Christchurch, New Zealand. I knew that I could not even begin a new Santa Cruz Trains book until that tremendous burden was off my shoulders. I finished all 105,000 words of my thesis in late October 2017 (it can be viewed at the university’s website here) and, by this point, had already returned to Felton due to the impending death of my father, which occurred on August 4, 2017. I defended my thesis in April 2018, after returning to New Zealand. But during the time that I was in California, I conducted the majority of my research for my new book and gave four public lectures on behalf of various local organizations.

Over the past four years, I have come to the understanding that nothing should surprise me when I am researching or looking at the future of the Santa Cruz Trains brand. And it is a brand. It has two books with a third forthcoming, and I have plans for a few more, some anticipate and others not. For instance, I am more aware now of the potential for the Reflections sub-series and I am planning accordingly, collecting as many photographs as I can as well as fun quotes, so that I will have extra material to include in a future Reflections on the Coast (or Coastal?) Route. I also am developing eight (EIGHT!) children’s books, most of which focus on the life and adventures of a station agent who worked at Wright at the turn of the century. The other book focuses on a visit to Santa Cruz in 1903 by a very important person (No guesses!). I am in the final stages of cleaning up these stories and then I will need to work on finding an illustrator since my illustrating ability most closely resembles the impressions left by hot coals dragged across concrete.

But the final piece is the true surprise to me, and I only came to this realization about a month ago: I need to write a third, albeit shorter and less photographic, book. I have tentatively titled this Santa Cruz Trains: A Handbook to Santa Cruz County Railroading. I have no release date although it definitely will come out after Railroads of the Santa Cruz Coast. The reason I need to write this book is because my current book and its upcoming sequel are too stuffed with information that distracts from what I am trying to do in these books. Railroads of the Santa Cruz Mountains and Coast are about the stations, flag stops, freight stops, picnic stops, bridges, tunnels, and other features along the line. They are not, however, histories of the actual railroads nor are they intended to be. However, interesting elements of history have cropped up, especially in the Prelude sections, but also in things such as the King’s Creek Mill and Chase Mill articles in my first book.

While very interesting, the actual histories of the plans for, construction of, planned expansions of, closures of, and attempts to reopen/restore railroad lines in the county fall outside of the scope of these books. And they need to! But over the past year, I have written articles about the Hihn Railroad Grade; failed attempts to build routes up the coast to San Francisco, into the interior to Fresno, through the Santa Cruz Mountains to the Bay Area; and feasibility studies to rest0re service through the mountains (similar studies have been and are being done for the coastal route, as well). More generally, I have written tons of articles about actual railroads that existed at one point in time, from the Santa Cruz Railroad in 1874 to the Santa Cruz & Monterey Bay Railway, which ended operations in 2018 (as the active carrier, Progressive Rail falls outside the scope of this book).

I have been very happy with the 352-page length of my current book, and I intend to keep the next book constrained to that size, but to do so, I really need to pull out material that relates to larger railroad-related history and make sure the book stays on track (pun intended). Thus, this new handbook will give me a place to direct corporate material, which includes important regional histories that transcend the books, and it will also allow me to include some fun newspaper speculation relating to the proposed expansion of Southern Pacific lines throughout the area.

So stay tuned. There is still a lot of Santa Cruz Trains in the future. The timeline is vague, but there are at least eleven books of varying sizes and audiences planned for the near future. Oh, and if you know a local (Santa Cruz County or Los Gatos-area) artist with a passion for railroads, let them know that I am looking for people interested in illustrating a number of books.